The King of the Terrain

Leopards hold the formidable position of being the top predator in most terrestrial habitats in Sri Lanka. While a large number of national parks in the country are home to the Sri Lankan leopard, Yala and Wilpattu are considered to maintain to largest populations of the species. The open terrain that is habituated with grasslands and scrub jungle makes it an ideal home for leopards. Research done in Block 1 of the Yala National Park has indicated that the habitat has a staggering leopard diversity of one leopard per square kilometer.

The extensive grasslands and abundance of freshwater lakes in Yala National Park also makes it an ideal location for the spotted deer - the leopards prey. This in turn ensures the sustenance of the leopard population in Yala.

While a sighting of a leopard can never be guaranteed, the chance of seeing one in Sri Lanka is quite significant. It is sometimes even possible to sight a leopard  during the day, especially younger cubs who walk fearlessly down open roads.

Residents and Transients -
the social interactions of leopards

Leopards that are sighted in a specific area can either be residents or transients. The behaviour patterns of the leopard will alter depending on its status. 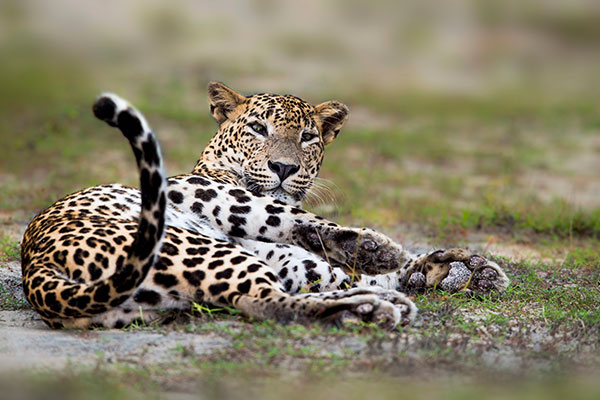 This is similar to the social structure of leopard populations in other parts of Asia and Africa.

Residents are those who have established home ranges in which they are also sexually active. While home range refers to a larger area, territory is considered to be the core of the same area.  Transient leopards are those who may inhibit an area for a few days or even weeks, but have not claimed ownership. Transients are mostly young male cubs who are in seek of their own territories. The act of establishing ownership is generally done through methods such as scent spraying, scraping and vocalizations. Leopard scents while being useful to mark territory and maintain a life of solitary, are also important indicators of mating readiness. Females use such cues to indicate different stages of their estrous cycle.

Overlapping home ranges are often found in a single habitat with multiple leopards. Males may have home ranges overlapping with one other male and multiple females. While males use the clues left behind by other males to avoid each other, cues left by female leopards are used for mating.  Transient and resident leopards are generally able to avoid conflict as long as the transient respects the authority of the latter. However, transient leopards attempting to mate within another leopard’s territory isn’t unheard of.

The mating process is initiated by the female leopard. This generally takes place during a specific week that is the prime point for mating for female leopards. The female will establish physical contact with the male leopard within her territory by rubbing herself against him. Once the male is aroused she will lie on her belly and allow the male to mount from behind. Copulation that takes close to thirty seconds can happen multiple times in a single occasion. This interaction can take place for two to seven days. Mating pairs are also known to hunt together.

Female leopards endure a gestation period of eighty five to one hundred days. Following this they give birth to two to three leopards at a time. Leopard cubs are dark and lightly spotted immediately after they are born. They only attain their classic yellow and black patterns after a few months. Leopard cubs stay dependant on their mothers for the first year of their life. However, as the year progresses, their interactions become less and less frequent.They are weaned between three to four months and after a year they begin their independent hunting.

Male resident leopards do not pose a risk to the young cubs living within their home ranges as they are mostly their own. Young leopards are protected from predators such as pythons, jackals and crocodiles by their mothers choosing rocky caves as den sites.

Hunting is an important and interesting behavior of leopards as they dominate most terrestrial habitats in the country. An adult leopard generally makes a minimum of one kill per week, ideally more.

The Sri Lankan leopard feeds on a variety of animals including amphibians, small mammals and even larger mammals such as the spotted deer. In Sri Lanka, only elephants and adult buffalos are not hunted by leopards.

The main strategy used by leopards during a hunt is to quietly sneak close to their prey through the long grass and scrub that acts as a camouflage. This is followed by a dash and a leap that allows a leopard to secure its jaws around the neck of the prey. The leopard will then feed on the kill for twenty minutes to an hour on one occasion and return to the kill multiple times during a day.

In some habitats leopards are known to drag their prey to areas that cannot be accessed by scavengers. This behaviour isn’t common in Sri Lanka as the scavenger populations are limited. In addition, due to the abundance of prey, leopards often prefer to execute another kill rather than expelling energy to safeguard one.

According to research conducted by WWCT, the distribution of the leopard across the country is about 37% of its range. Historically it used to be spread throughout the island, but it’s no longer found in the South Western areas; it’s also not found in the vast agricultural lands towards Anuradhapura. “It still exists over about 50% of the island, but it actually lives within about 20% and that area is strongly linked with forest cover. This includes protected areas as well which are linked to forest cover because the leopard is reliant on prey. Therefore the forest cover is very important. This is similar in the dry zone evergreen National Parks like Yala, Lunugamwehera, Weheragala, Kumana Udawalawe and Wanni Jungles. The Central hills called Hatton, Dikoya, Nanuoya, Ohiya and Knuckles Horton Plains National Park and Haggala Strict Nature Reserve. In the wet zone they have recorded in Peak Wilderness Sanctuary, Bogawantalawa and Maskeliya. More limited populations are found in the lowland wet zones including Sinharaja forest. 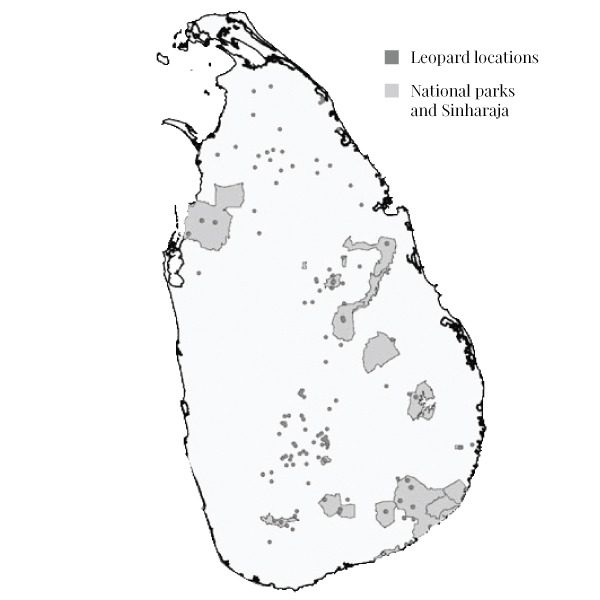 The total abundance of leopards in Sri Lanka is unknown. Regardless, it is widely accepted that their abundance has significantly reduced due to hunting, poaching and loss of habitat. Even though the species is legally protected according to the Fauna and Flora Protection Ordinance of 1983, poaching is still prevalent in most parts of the country,